As an avid bowhunter, there are few things that are more satisfying than sneaking into range of a cagey mule deer buck and watching your arrow effortlessly disappear behind their shoulder. It’s the end result of many moving parts that have finally all lined up. Figuring out how to line those parts up though is much easier said than done. And doing so during the early season is one thing. The late season though? That’s a whole different beast. Success rates are low for a reason. With that in mind, we’re going to break down how we’ve found success spot and stalk archery hunting mule deer during the late season. Hopefully at the end of this, you’ll be on a much more visible path towards arrowing a rutted up mule deer buck.

The chess match that is spot and stalk bowhunting mule deer all starts well before the hunt. First, we need to locate suitable deer country. This piece is on late season hunting, so that means winter range as well as migration routes to said winter range need to be on your radar. A fantastic way to find this stuff out aside from boots on the ground scouting in year’s past, is to simply call the local game and fish. In our experience, game and fish is always happy to provide intel on these kinds of things. Now, they’re not gonna tell you where the big one is bedded, but they sure can provide starting points to kick off your search. 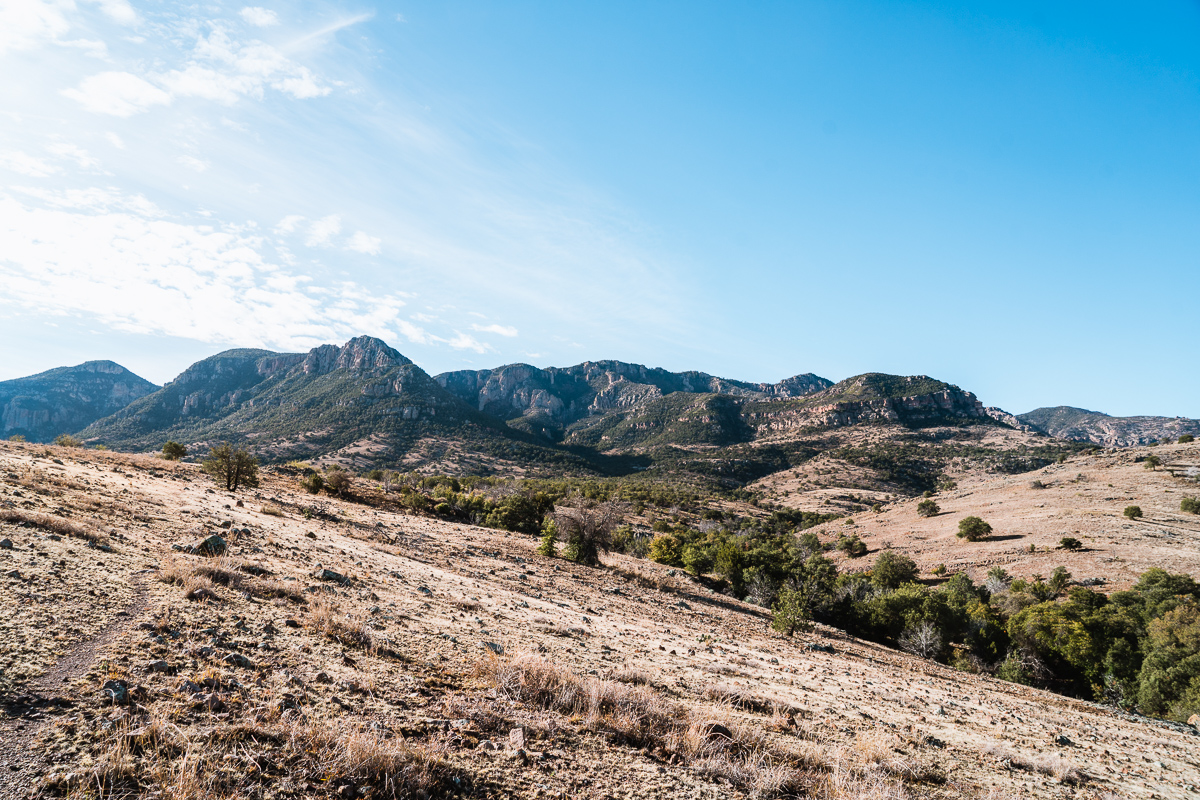 Once you’ve narrowed down country to hunt, it’s time to scout out a few well placed vantage points. Think of these as watch towers. High points where one can sit down and use their optics to scan the surrounding country. They can also be low points too, but elevation always provides the best view. Doing this can easily be achieved by looking at a topo map. Notate elevated main ridgelines. These are great to hike along and glass from. Points that jut out from these ridges are also great spots to glass from, often offering almost a 360 degree view. Pay attention to where the water is too from these spots, especially in arid environments like the southwest. Bucks are running on and off all day. They will undoubtedly stop to drink. Knowing how the country lays out beforehand is going to come in handy for planning stalks.

Lastly, and most importantly, the does are where it’s at. Late season bowhunting mule deer usually means hunting during the rut. And during the rut, it’s all about the does. Don’t worry about finding bucks during your pre-season scouting. To be blunt, it really doesn’t matter where they are. You need to scout where they are going to be, not where they are before season. Try to keep tabs on several different groups of does and that’s it. When the rut kicks in, the bucks are going to show up like magic. We promise.

By a long shot, glassing is the most effective way to locate and keep tabs on deer in a non-intrusive way. It allows a hunter to stay back and watch deer simply act like deer from a far. That is essential intel for quality spot and stalk bowhunting. Staying back like this provides the opportunity for a hunter to plan out a calculated approach towards the animal. One that will lend to them approaching undetected. The best buck to stalk is one that doesn’t know you’re there. Glassing is a great way to make that happen.

Glassing is an art, and sometimes a slow and agonizing one. Nonetheless, doing so makes a world of difference. The best way that we’ve found to do so is by sitting up high, mounting our optics to a tripod, and grid searching the surrounding country. Grid searching is a great way to “organize country.” It ensures you’ve glassed everywhere and not left a stone unturned. Good starting points to look are south and east facing slopes in the morning and the opposite during the warmest parts of the day. When doing this, look for parts of deer, not necessarily a whole deer. Things like an ear, the white rear end of a mule deer, or legs moving through the grass. And remember, find the does and stay on them. The bucks will be close by if not right with them.

How to Close the Distance

Once you’ve located a buck, it’s time to tackle the stalk portion of spot and stalk. There are a laundry list of lessons to be learned here. A constant throughout everything though to keep in mind is the wind. Nothing works if the wind is wrong. Aside from that, these are some things we’ve learned through the years sneaking up on mule deer during the late season. 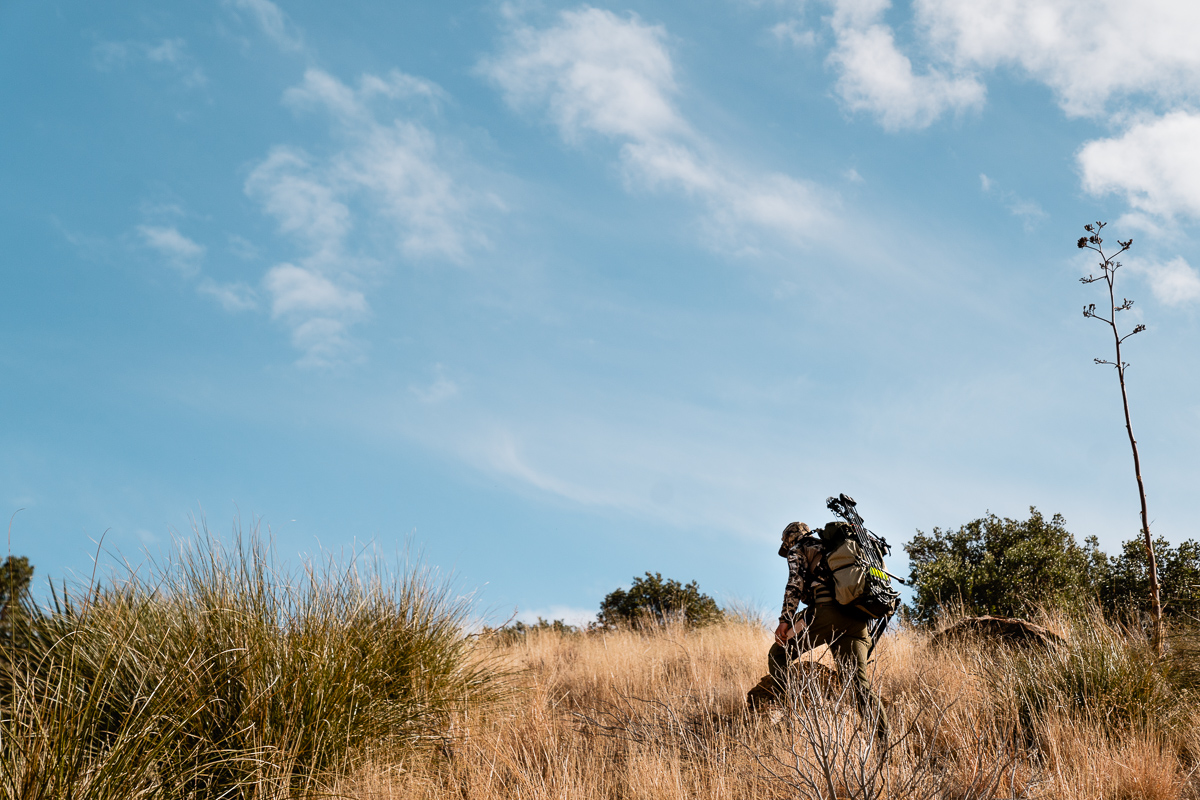 Planning a solid route before taking your first step on a stalk is massive. The easiest way to do this is by breaking the stalk down into sections using landmarks. Go from point A to B. Then from C to D. So on and so forth. Take note of any prominent features that you can use during your navigation. Maybe a big dead tree, a boulder field, or a bluff line. And don’t just plan this route. Study it. The fact of the matter is, everything is going to look different once you’ve changed your visual perspective. So, you need to know the country the best you can before setting off. Taking a picture with your phone of said country ahead of you leaving can help out a lot here and serve as a helpful reference along the way. 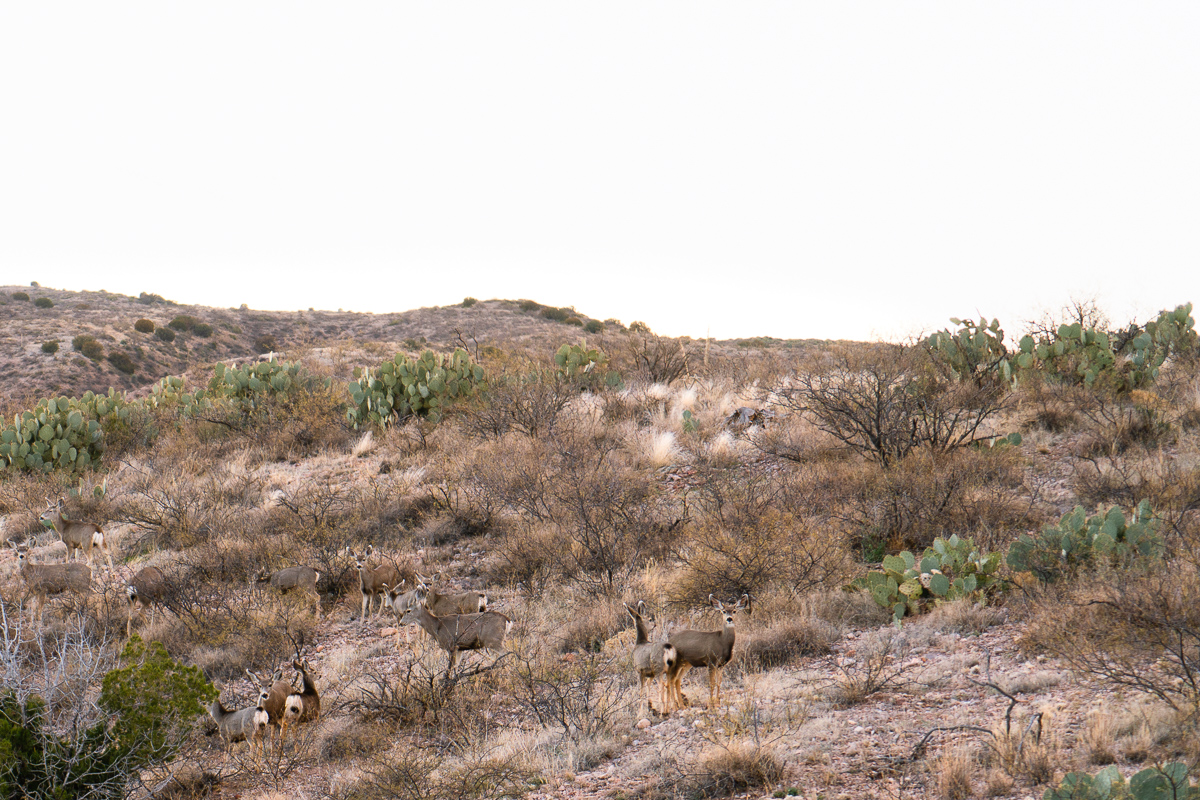 The rut is a chaotic time in terms of deer movement. Bucks are running amuck and pushing does all over the place. Among this uncertainty though there is some certainty. And that is the bucks are going to go wherever the does go. So, use that. Whether it’s taking note of the general direction the does are moving and cutting them off, or somehow putting yourself in between the buck and does, doing so will likely put the buck in front of you. It’s much easier for him to come to you than you go to him that last stretch.

Move It or Lose It

When it’s breeding season, bucks have one thing on their mind. This is the reasoning behind their somewhat unpredictable movements and it’s also why getting aggressive during stalks is a necessity. For years and years I did the whole try to bed them down thing and for years I missed out on stalking opportunities. Bucks just don’t stay put for a long time, which means you need to move it or lose it. Personally, if I see a buck I want to go after, I take note of the wind, plan a route, and go. This is especially true if he’s rutting does. He’s being aggressive, so you be aggressive.

I need to clear something up before moving on. If a buck is not with does, he’s likely trying to find some. This usually means he’s constantly moving. So, unless you can get ahead of him quickly, try to watch him until he finds what he’s looking for.

Don’t Take Your Boots Off Just Yet 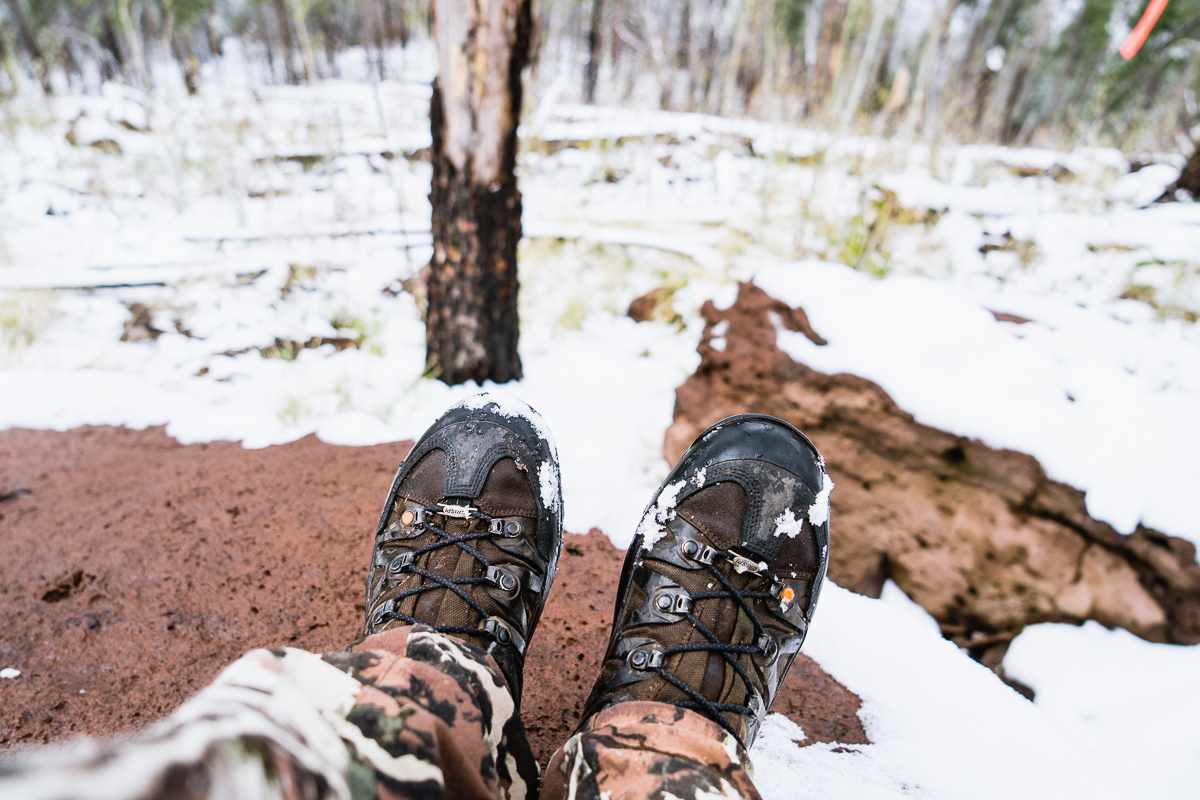 One of the most common tactics for spot and stalk bowhunting that you’ll see is folks taking their boots off to finish a stalk. It’s a great strategy that has proven its legitimacy time and time again. Usually, this is during the early season when bucks are staying put for hours on end. During the late season, things are different. With the increased deer activity that comes from the rut, taking off your boots might do more harm than good. Especially if there is snow on the ground. A hunter just never can predict how far they are going to go following a rutting buck. I’ve made some pretty long bootless walks of shame in the past. It isn’t worth it. Nowadays, the boots stay on and I can be extra mobile, moving with the deer if need be. 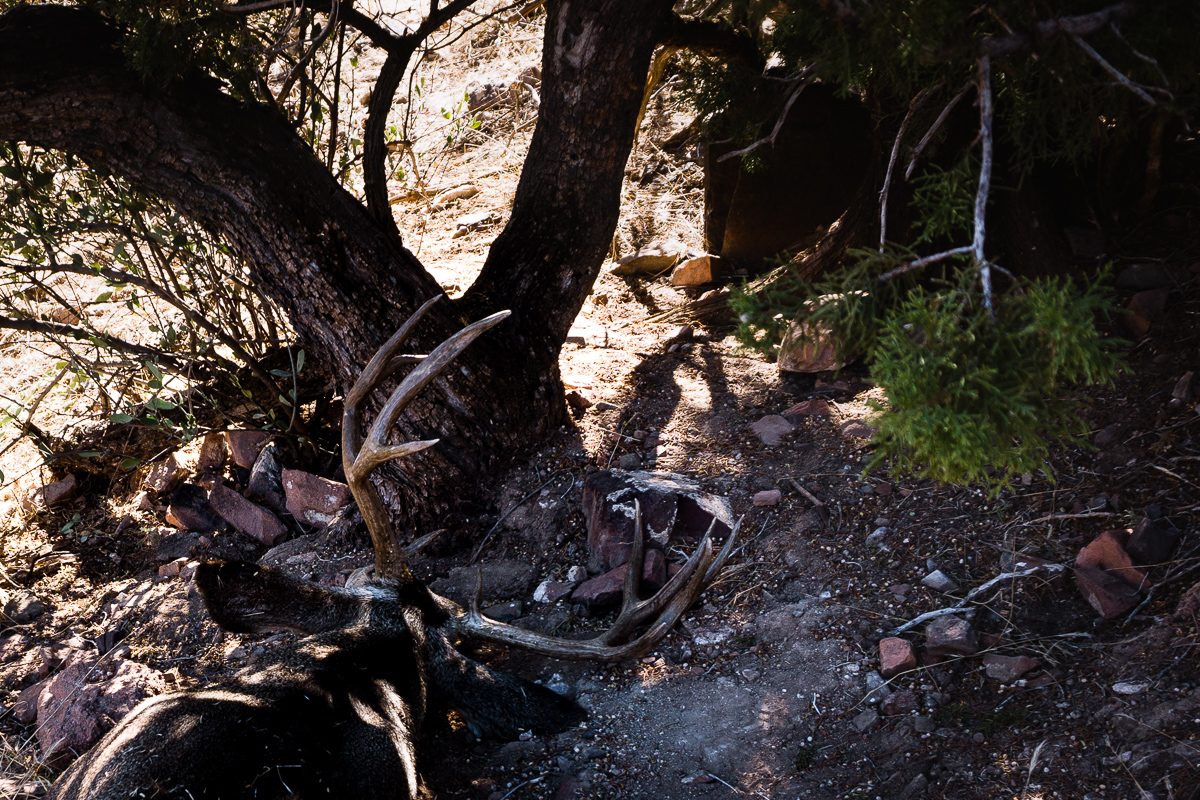 Spot and stalk bowhunting mule deer comes with a high amount of variability. There are so many things at play and those things can change very fast, leaving you the hunter having to adapt on the fly. That’s normal and should be expected. It also comes with a high amount of difficulty. So, when trying to sharpen your skills remember that and take every opportunity you can get. We get better at things through repetition, which means taking those “at bats” is the only way to further your bowhunting skills as a spot and stalk mule deer hunter. I’m not going to lie, failure is inevitable. Look at those as lessons rather than failures though. They are little pieces to the puzzle that will help light the way towards success. Eventually, all of those moving parts are going to line up for you. And at that point, success is inevitable. 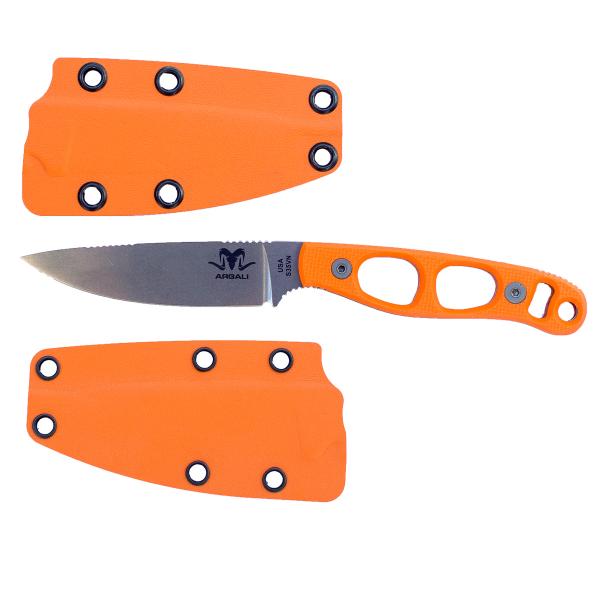