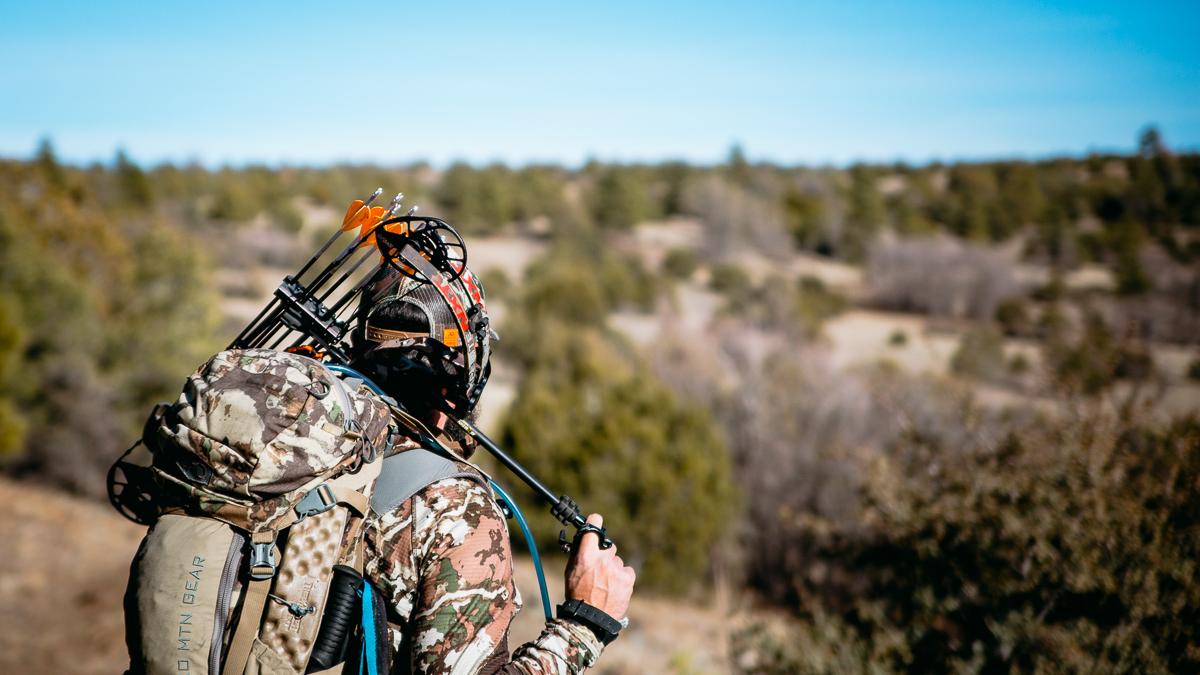 Increase Your Archery Accuracy During the Off Season

Anybody getting antsy yet? Right about now, most of the country has been laid up and about sick of enduring Mother Nature’s icy breath of winter. Spring hunting seasons will be here before we know it though, and Fall soon after. If you haven’t been shooting your bow, now is the time to scrape off the bitter cold rust and get in gear. Sadly, archery is not just like riding a bike. We can’t put a bow down for months and then just start where we left off last season. There is some polishing that needs to occur in order to be razor sharp. Here are some things that we’ve found helpful to weed through the off season with a bow and help increase your accuracy for the coming season. 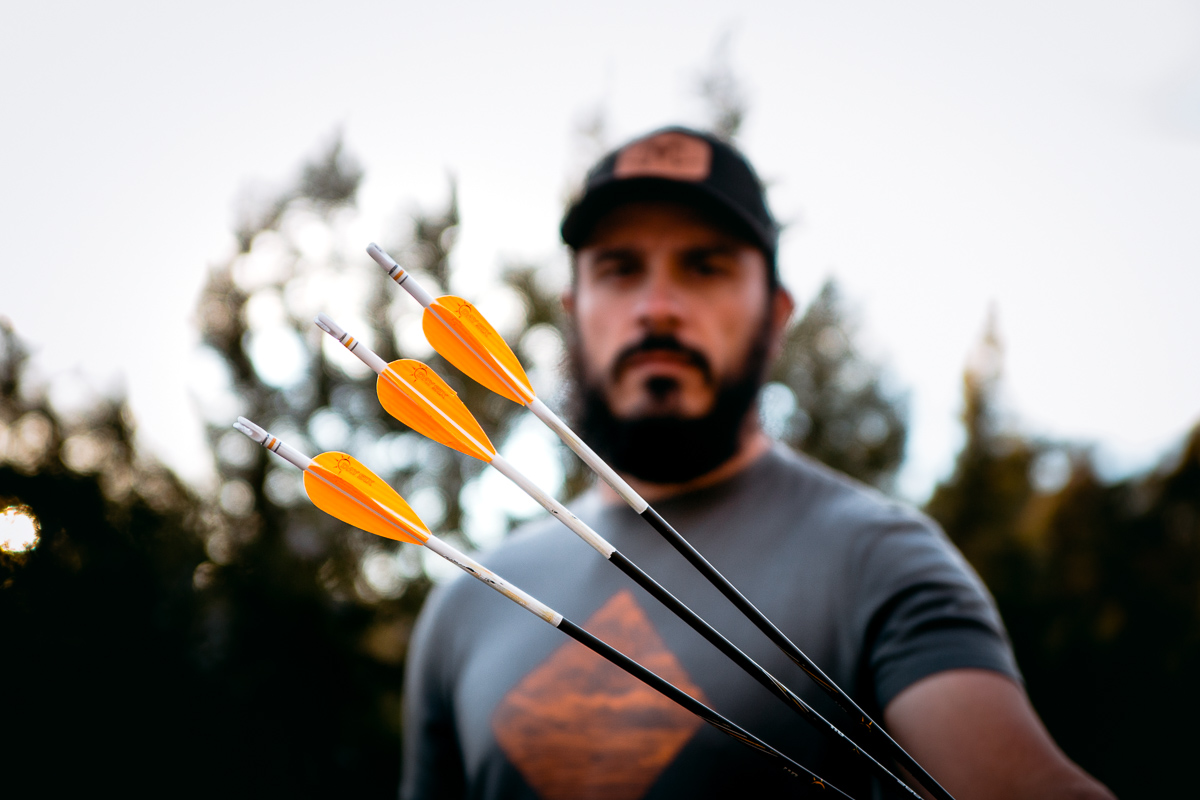 Personally, I tend to have a rather obsessive type of personality. My go to method for getting good at something is to do it as much, and as often, as possible. Too much of a good thing isn’t a good thing though. When it comes to shooting a bow, and shooting a bow properly, I’ve found that consistency stomps volume every time.

In my early years of shooting a bow, I’d be in the backyard for hours doing so. Dedication is absolutely a key element in progression, but overloading yourself will halt the very progression you seek. Because I was shooting for such a long time, my form would start to break down. This was due to fatigue. I am by nature a stubborn guy, so of course I’d fight through that fatigue and continue to dig myself into a hole of bad habits. All the while, I was taking one step forward and two steps back. It’s easy to form bad habits. It’s much harder to break them. Being stubborn got the best of me here.

Once I realized this, I cut my archery sessions down to 30 minutes max. Sometimes, to this day, I’ll only shoot 3-6 arrows before going inside. Now, I know that doesn’t sound like a lot, but hear me out. On each one of those arrows, I try to execute the absolute best shot possible. No punching, no rushing, solid form, and laser beam focus. I do this every single day I’m at home. By doing so, I’m building muscle memory. Of course there are days where I hit the archery range or a 3D course for a long stretch, but the majority of my archery practice looks like what I’ve outlined above. Consistent practice like this will aid in consistency behind the bow, which will aid in accuracy downrange. 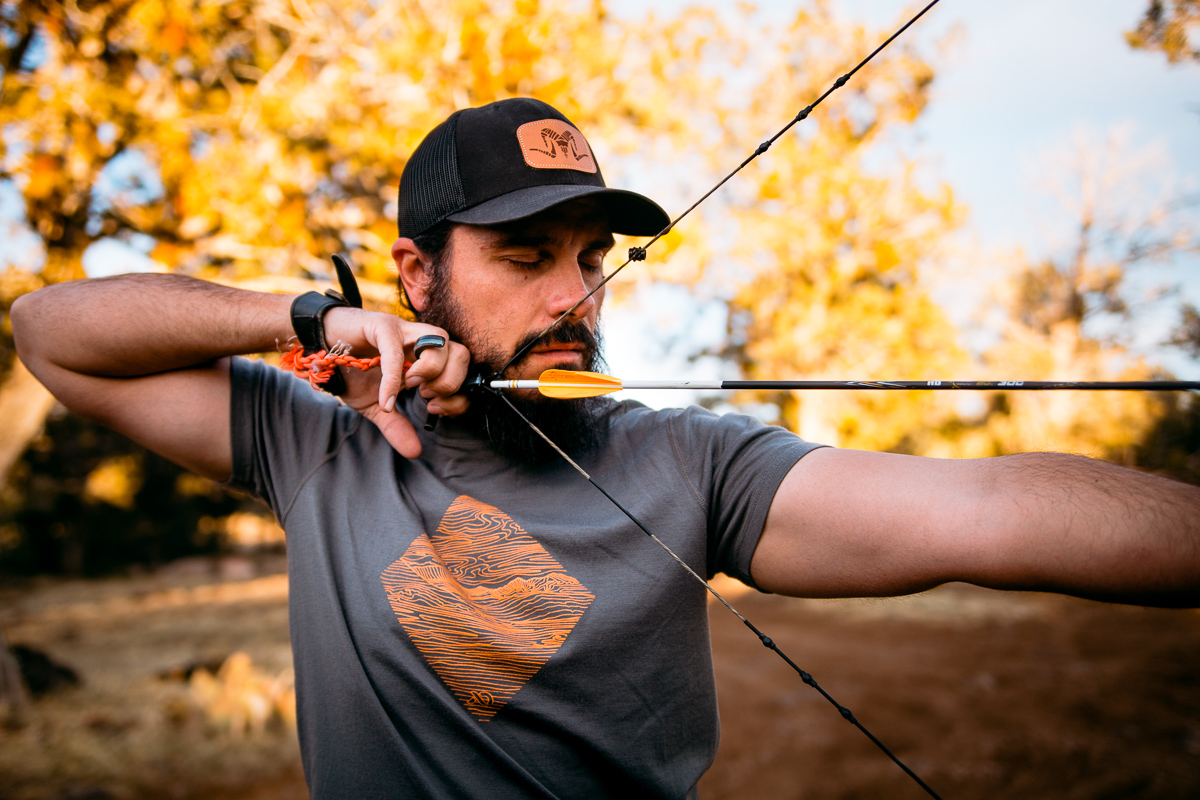 “Aim small, miss small.” I’m almost certain that all of you have heard that a time or two in your jaunts around the sun. This is a phenomenal way to be deadly accurate. Aiming for a bullseye is one thing, but aiming for a particular spot within that bullseye will give next level accuracy. While that sounds just about perfect, I’m going to tell you to stop aiming! Let me explain.

Aiming is a non-negotiable skill as a bowhunter, but it can have it’s disadvantages during practice. The perfectionist in all of us is beyond guilty of doing something called “over aiming.” This is when we try to aim so precisely and perfectly, that we actually end up at full draw too long, which then starts to break down our form, and results in a less than desirable shot placement. It can also lead to target panic, which is another article entirely. Along with that, aiming too much can take focus away from one of the most important factors while at full draw. Shot execution.

In order to strike a balance, we’ve found it incredibly helpful to forget about aiming from time to time and solely work on shot execution. This is best done at shorter ranges of course. Personally, I’ve even done it from a mere 10 feet or less with my eyes closed. You want to be close, so you don’t miss the target while in the dark. I’d come to full draw, put the pins in the center of the target, then shut my eyes, and execute. Many know this as blank bail shooting. All we’re looking to do here is focus on proper form and shot execution. Pay attention to things like anchor points, not letting your shoulder collapse, and having a relaxed grip among a few. And of course, let’s not smash the trigger into oblivion to get the shot off. All of these things fall victim to over aiming and each of them play a role in accuracy. 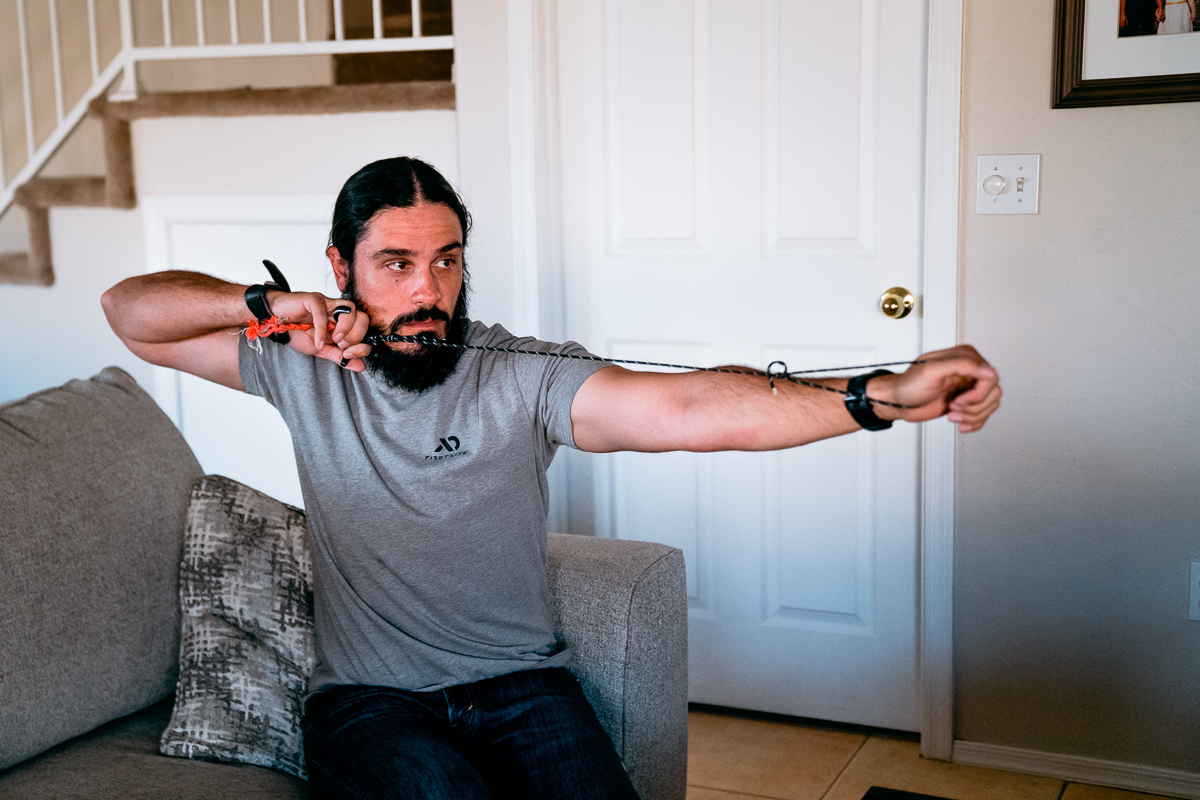 A solid release of an arrow will speak volumes downrange. I mentioned earlier though that shooting too much at once can lead to our form breaking down and spawning bad habits. So, how do we perfect our release without sacrificing energy and form? One word. Paracord.

A fantastic way to practice mastering a release aid is by cutting a piece of paracord a bit longer than your draw length. You want to cut it a little longer, because you’ll need to tie loops at each end. One big enough for your hand and the other big enough to hook on your release. That will shorten the cord a bit to more accurately match your draw length. After that, it’s pretty self explanatory.

Put the thumb of your bow arm through the bigger loop to rest the paracord along your lifeline, exactly how you’d grip your bow. The other loop will be attached to your release. Now, with no physical effort at all, or worry of aiming, you’ll be able to mimic being at full draw. Anchor in and focus on getting a clean release. Close your eyes even to really hone in on how everything feels. Pull through the shot and let the release fire. This is great, because one can do this even sitting at the computer, or in front of the TV.

Whether we’re at the archery range or in the backyard, situations are often ideal. We’re in the perfect stance, maybe wearing pajamas, and can release the arrow whenever we see fit. That last bit there is what we’ll cover here though. 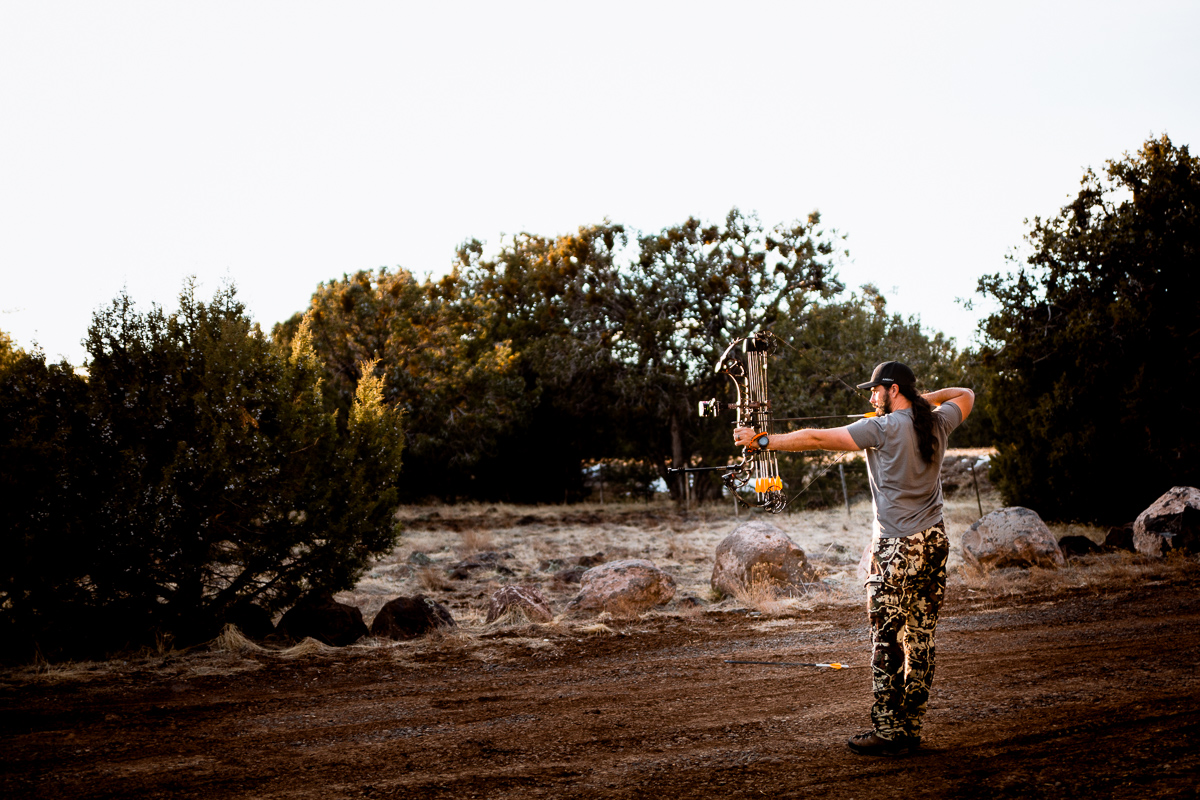 Releasing the arrow whenever we want is not always likely in the field. Sometimes, we’re going to have to hold our bows at full draw for much longer than what we do back home. Drawing a bow creates a lot of movement, so it’s something we want to do before the animal sees us. Which means we’ll have to wait at full draw for the shot to present itself. The good thing is, we can practice this on our own ahead of time.

A simple yet effective exercise to help with this is what I’ll call “The 10’s.” Come to full draw and wait 10 seconds before starting to execute your shot. Now, increase the next shot to 20 seconds before execution. And the next to 30 seconds. You get the idea. See how far you can make it before fatiguing at full draw. I’ve added in actually shooting to this exercise, because that’s what we’re trying to improve up. Not just our ability to stay at full draw for an extended time. We need to know how to shoot after the fact to match hunting scenarios. By doing this, you’ll not only know your threshold, you’ll be able to act upon it, and increase that threshold. Being at full draw for over a minute is not uncommon in the field. Exercise the 10’s and you’ll be that much more ready for those encounters. 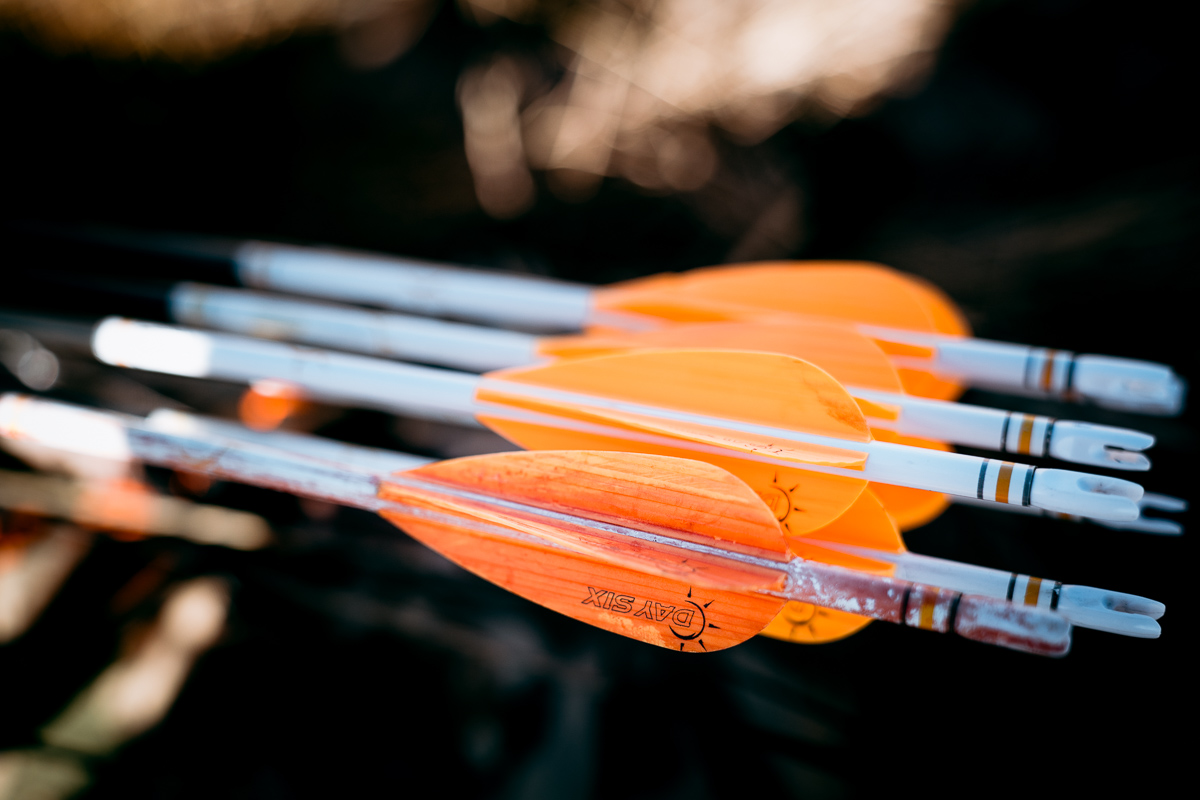 Being consistently successful with a bow takes consistent effort. Our accuracy plays a huge role in that success. It needs to be second nature to run through our shot sequence and know we’re going to hit what we’re looking at. Building that confidence ahead of time will help one perform under the intense situations that come with archery hunting. We can be great at hacking bad weather, finding animals, have superior fitness, and even excel at stalking. If the arrow doesn’t go where we need it to though, our backpacks aren’t getting any heavier. Accuracy is everything.