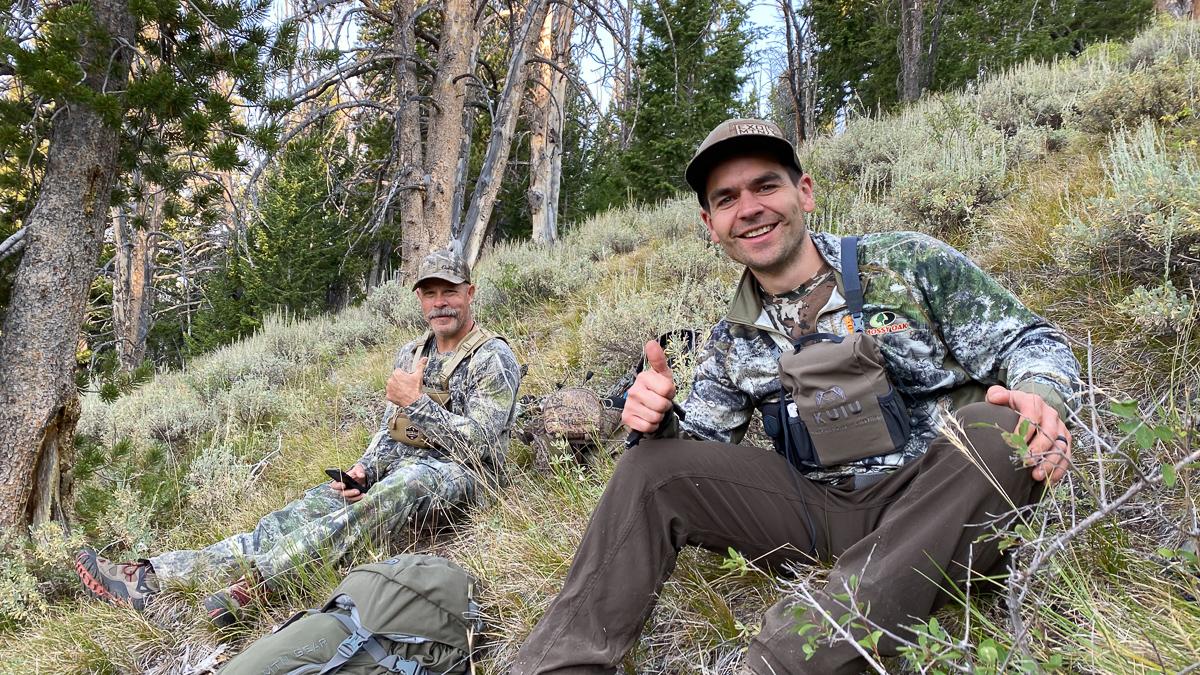 I was hooked. Like legitimately, the edge of my seat, giddy school girl, hooked. I couldn’t click refresh enough times waiting on a new episode to pop up on the Argali YouTube channel.

The Brooks Brothers series launched by the gang at Argali during the off-season was a riveting look at the bond between brothers, the heritage of a sport they grew up doing, and how being “out there” is far more than just hunting.

I have to admit though, as a guy who makes a living helping people plan nutrition to achieve big goals like backcountry hunting, I almost spit my dinner out when Brad mentioned “starvation rations” for food on the trip in episode 21.

I’ve had the privilege of getting to know Brad some and know he knows how to dial his nutrition in, so chalked this comment up to a case of just wanting to get out the door for the hunt rather than invest a ton of time in planning his meals.

Now, to be fair, you won’t die if this is your approach and you aren’t wrong in approaching it this way. However, I would also argue that we’ve left a lot of space between simply surviving “out there” and doing well, having enough energy for the duration of a long hunt, and enough energy to pack meat if the situation calls for it.

With draw results starting to trickle in, there’s no doubt you’ve already begun to think about your strategy for this fall; what shelter you’ll take, what boots you want to wear, and what you plan to have on hand to eat. A well-planned nutrition strategy can mean the difference between still going as strong on day 7 as you did day 1 rather than hitting a wall midway through if you hadn’t planned out a decent game plan.  There are four major components of a well-planned nutrition strategy for the backcountry.  They are:

Calories and Macronutrients; What are They and What Really Matters? 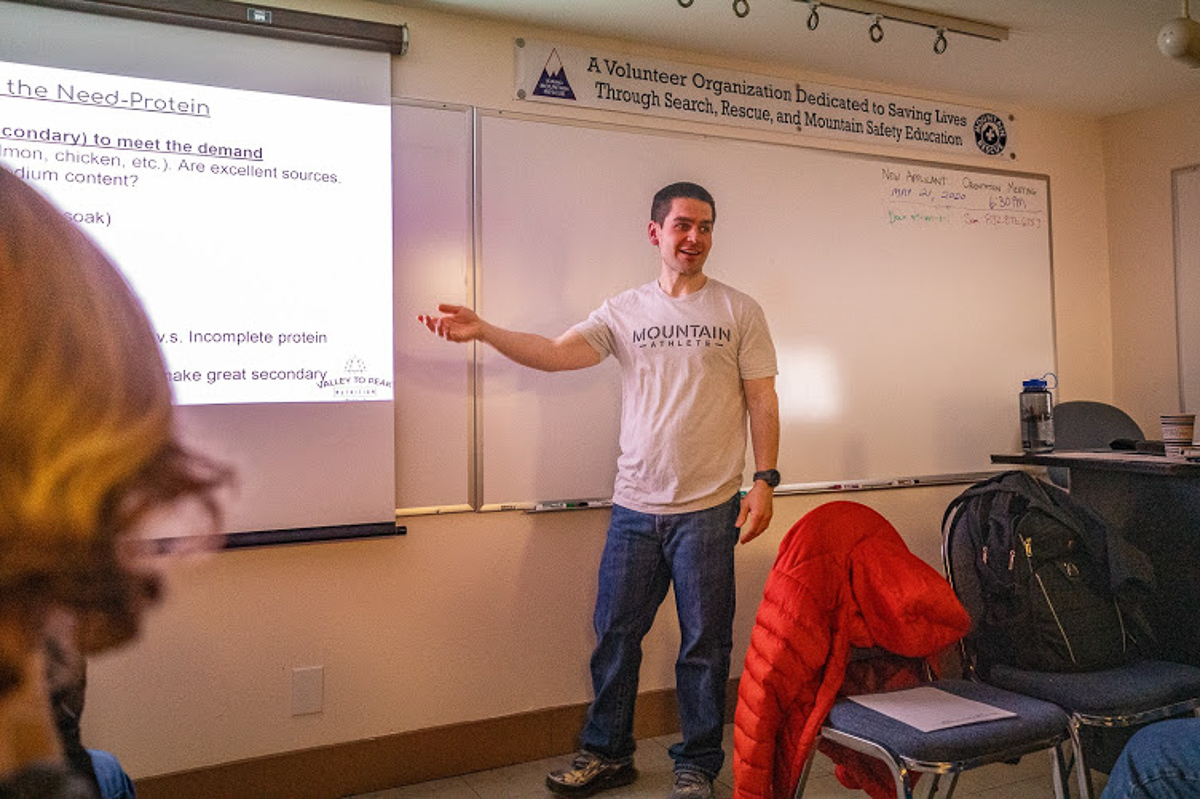 It seems like a universal prescription for hunters to aim for 3500kcal per day on most backcountry hunts. There’s nothing wrong with this per se. It will be spot on for some folks’ needs, lower for others, and even higher than needed for a select few. What’s more important is that calories aren’t universal- especially not in performance/backcountry nutrition.

A calorie only matters when it’s from the right place or the right macronutrient.

We have three main macronutrients- carbohydrates, proteins, and fats. Each of these macronutrients has a basic job, role, or function in human physiology and performance nutrition.

The role of protein is for tissue growth and repair. It is NOT designed to be an energy source. As such, you do NOT need a ton of the stuff when planning for a backcountry hunt. The amount a person needs can vary, but there are very few instances where a person should be packing in more than 100g to have during the day.

The role of carbohydrates is twofold - (1) it’s the predominant fuel of the body (namely the active muscle) and (2) it’s protein sparing.

Let’s first talk about protein-sparing. When carbohydrates are consumed in adequate amounts, it allows the protein that’s ingested to be used for its job of growth and repair. If carbohydrates are not supplied in sufficient amounts, the body must create them through a number of different processes - one of them being the breakdown of consumed protein for energy. It would be very wise to supply an ample amount of carbs so protein can be left to do its job.

Now let’s tackle the piece about carbohydrates being the main source of fuel for the body. We do know that carbohydrates are an efficient fuel as the time between consumption is use is very low. What’s more is when supplied in adequate amounts, carbohydrates refill the stores that power muscles (glycogen). I probably don’t need to highlight this, but when the fuel supply is cut short, the engine (i.e. your muscle) has less than ideal performance. Your goal should be to allocate at least 50% of your calorie intake to carbs. Some caveats exist here for diabetics, etc. It would be wise for you to have a personal consultation with a dietitian in your area.

The predominant role of fat is hormone transport and for the absorption of fat-soluble vitamins like vitamins A, D, E, and K. Fat can be used as a fuel source, but it is not the preferred fuel source in human performance nutrition. This topic is quite extensive, but in short, the process of breaking down fat into useable energy is quite long when compared to that of carbohydrates. Additionally, we also know that the body relies more on carbohydrates as fuel when exercise intensity (i.e. climbing elevation) increases.

Putting It All Together

There are a number of ways to approach planning your nutrition on a fall hunt in the backcountry. The first step is to understand the fuel needed from a calorie standpoint and then build out how you will get those calories (i.e., where will they come from). Balance the data you get with practical application by asking “what can I realistically carry for the number of days I have planned?”

What About all that Sugar?

If there’s one thing we’re not in short supply of in the world of nutrition, it’s information on how too much sugar consumption has a dramatic impact on our long -term health. Time and time again we’ve seen how too much of the stuff is the main driver of weight-related issues chronic disease- diseases like type 2 diabetes, heart disease, etc.

However, there’s one HUGE factor that makes the typical advice of avoidance different when you’re in the mountains than when you’re behind the desk - and that’s your activity level.

First and foremost, when it comes to sugar consumption, it’s the dose that makes the poison, not the granular morsels of deliciousness themselves. Sugar only causes issues when it’s in excess. A key factor in deciding where that pendulum shifts from an OK amount to excess is activity.

Because sugar is a carbohydrate, it CAN be an excellent fuel source - particularly when you’re in the mountains and making a big vertical climb to get a better vantage point for glassing, chasing a bull over several ridges in September, or packing that monster out of some hole you shot it in. In fact, it could be the thing that sits between the pack out being enjoyable* or a miserable experience.

Show Me, Coach!  A Lesson on Things to Tote and Things to Avoid

A question that I get a ton, be it general nutrition guidance or nutrition for the mountains, is “what should I avoid taking?” Folks usually mean, “what foods are going to cause me the most issues in reaching X,Y, and Z goal?” My answer is both comforting and confusing- it depends.

What you should avoid comes down to what you do or don’t tolerate well. Too often we get wrapped up in “optimal”, but fail to think “what’s practical?”. What good is the best nutrition plan on the planet it if it leaves you curled up in the fetal position 5-miles deep in the backcountry with what feels like 2 cinder blocks sitting in the space between your pelvis and your chest?

So, a MAIN guiding principle in this dance of what you should or shouldn’t take should be Y-O-U. Create a plan and try it out before you get to the mountain. Make sure you like it, first and foremost. Ask yourself “can I picture myself still gnawing on this after 5 days in the backcountry or will I have an issue getting it down?” Walking yourself through these questions, playing with your options, and giving yourself flexibility for trial and error will yield the best plan for you and that’s what we’re ultimately after.

“So…What SHOULD I Take Then?” 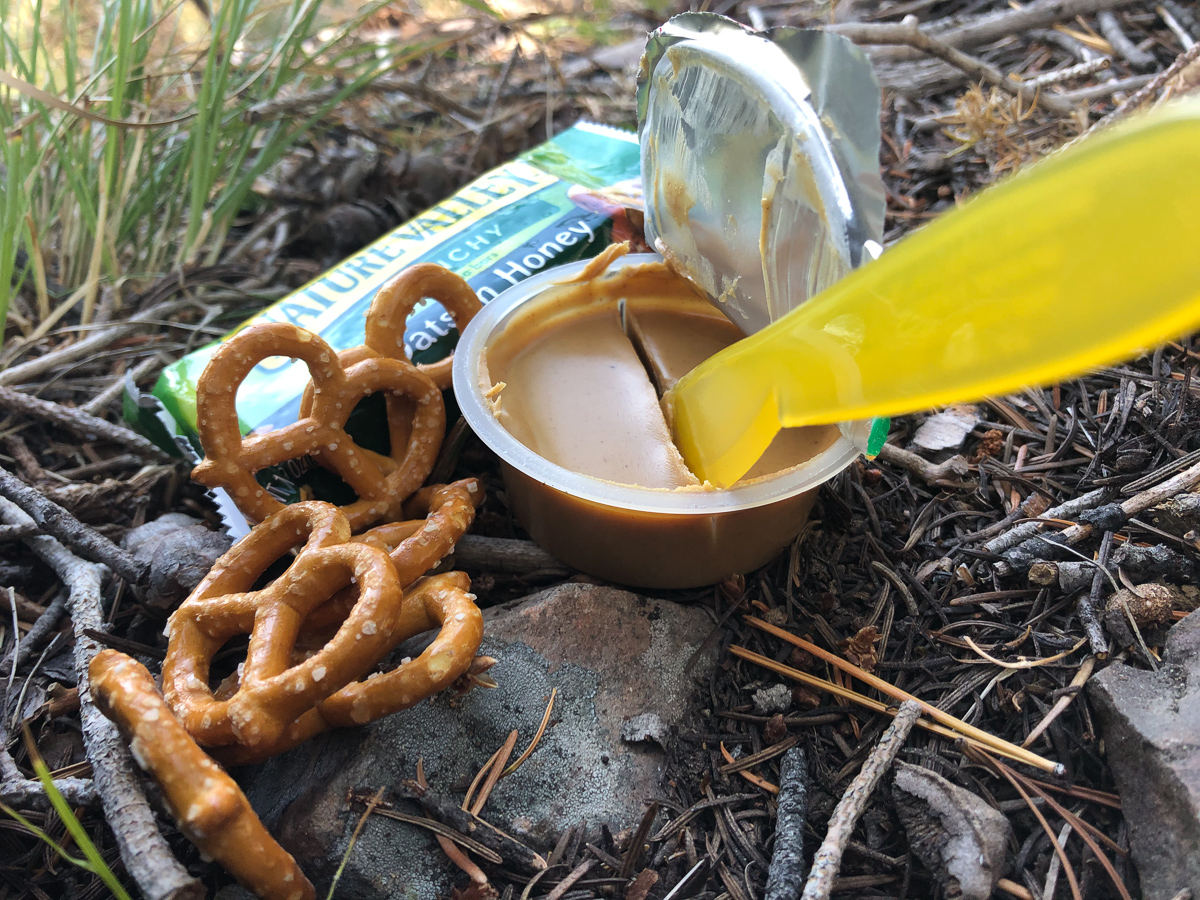 A good litmus test to run your plan through should focus on 3 questions:

Answer practical questions like this can make you look forward to actually eating what you brought or have you wishing you could depart your expedition early for a burger back in town.

Pretty basic, huh? No rules on sugar. No rules on “good” or “bad” foods. No special (and pricey) nutrition products you need to go buy. Just straightforward and simple advice to guide you in what to throw in the pack.

Here’s a few things I focus on:
My own DIY trail mix with boxed cereal, nuts, and dried fruit. This is in every single food bag I take on the mountain.  The cereal is typically fortified, which is an EXCELLENT way to sneak in some vitamins/minerals- a component of nutrition that’s tricky to sneak in the backcountry.  The cereal provides a slow-digesting carb for long-burning energy while the dry fruit offers some rapid burning energy for immediate needs…and yes, they both have sugar.

For a lot of the same reasons above, the humble PBJ offers a great combination of fast and slow-burning carbs to give you a solid energy source on the mountain. This will depend on your scenario and be much more doable if you’re mobile with a base camp you come back to each evening and can whip them up fresh each morning. I’ll still throw at least one of these bad boys in the day if we’re packing in, but any longer than that and the whole sandwich takes on a funky texture and soggy bread.

I know, I know, it sounds like hippy food, but bear with me... Edamame is one of the only sources of non-animal-based protein (animal proteins typically requires refrigeration) with all of the amino acids necessary for muscle recovery from exercise. I don’t take a ton of the stuff since protein isn’t an energy source, but I do toss some in the pack to ensure I hit my personal numbers.

You can get as boojie or generic as you want here. At the end of the day, we’re mainly wanting an easy-to-digest carb that breaks up the monotony of water. I’ve recommended everything from simple Country Time Lemonade to a pricier product like Tailwind. The latter will give you great sodium replacement and may be a better option for early August hunts in states like Nevada and New Mexico while the former might be better as the calendar starts to roll into fall.

That’s right. Pizza. Excellent carbs. Shelf-stability (after cooking) and highly processed cheese make this one of the most attractive options on the list. And, who wouldn’t opt for a slice or two of Dominoes in the place of a package of energy blocks at the trailhead?

Hopefully, that gives you some unconventional guidelines on what can go into the backcountry. It’s nothing complex. It’s nothing pricey and there’s no weird voodoo, Bill Nye type of explanation behind it all. It’s all fuel. Plain and simple.

Wrapping It Up (Pun Intended…) 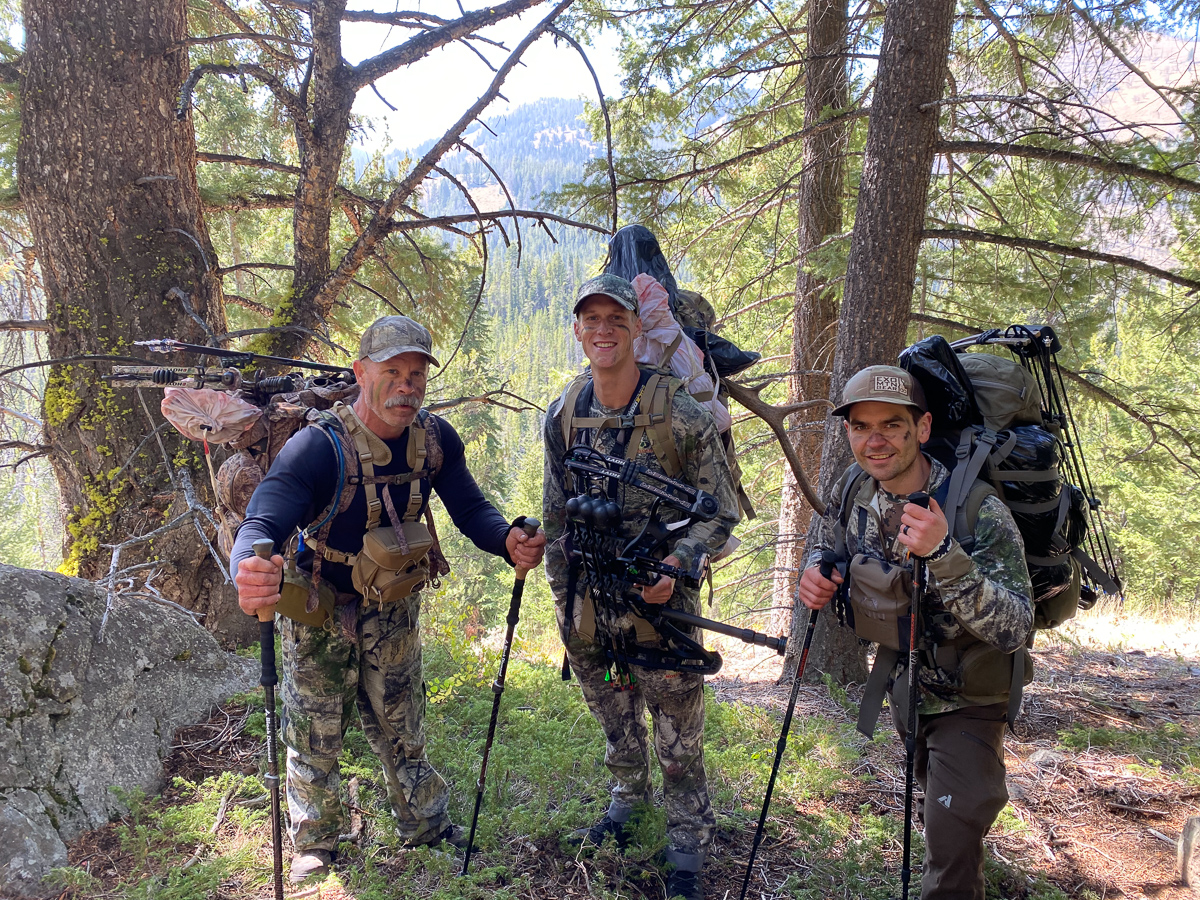 This article lays the basic foundations of nutrition and how to set up a strategy that can fuel a person well for any endeavor in the mountains. But, it’s only the start. It may take time and adjustment to truly tailor a plan that fits you well, but it’s an investment in time worth making to thrive in the backcountry. Who knows? You might even have enough food in your cache to loan Brad a couple of bars if you meet him in the backcountry.

Kyle Kamp is a Performance and Weight Loss Expert as well as a Registered Dietitian.  He runs Valley to Peak Nutrition out of Boise, ID and can be found at @v2pnutrition on Instagram.