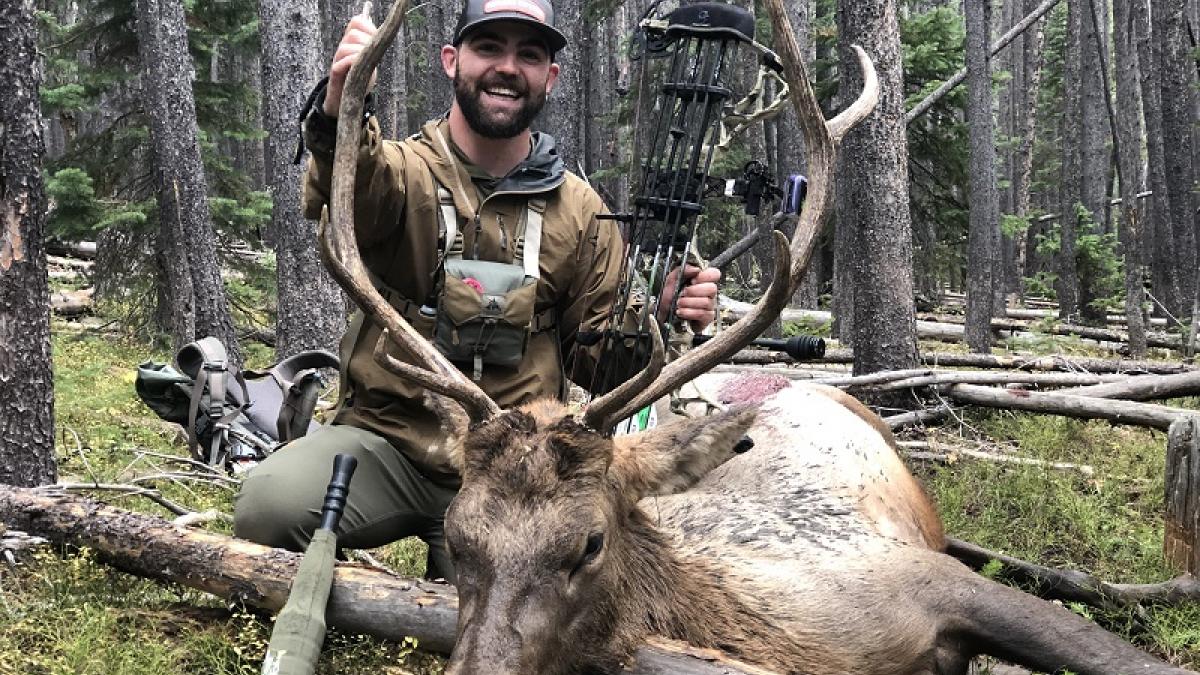 It took me 5 hunting seasons, 5 missed shots, 70 in-season days, over 500 boot miles, and an unknown (but absurd) amount of gas money before I killed my first bull elk with a bow. I made nearly every mistake in the book (and probably some that weren’t in the book) before my broadhead found it’s mark. While I will admit that the journey to harvesting my first elk was anything but smooth, there were a number of key changes that stand out compared to all other seasons I made in 2019. Those changes are what I believe lead to my freezer being filled.

In 2019, I took my fitness seriously and catered it specifically to mountain performance. When I started working a desk job full-time, I put on a pretty quick 30 lbs of body weight and contrary to what I told myself at the time, it was definitely not all muscle. I vividly remember an experience while trailing an elk herd in 2017 when I simply gave up because I ran out of steam in my lungs and stamina in my legs. On opening day in 2019, I was able to sprint a half-mile at 10,000 feet elevation and cut off a herd of elk in a pinch point.

The first thing I did to get serious about my fitness was starting the MTN Tough post-season fitness program. I followed their online programming on my phone 5 days per week for 16 total weeks while working out at my local gym. The process didn’t show incredible results on a day-to-day basis, or even week-to-week, but from February 2019 until June 2019, when I completed their program, I lost 15 lbs. I continued to do their workouts into the summer and going into elk season that number looked more like 18-20 lbs.

To be fair, it wasn’t that I was completely out of shape prior to 2019 season. I always have avoided fast food and done traditional lifting in the gym 3-4 days per week (bench press, pullups, hamstring curls, etc.) but it took me increasing my workout intensity with HIIT-type training on a consistent basis through a structured program to really take it to the next level for mountain hunting.

On the day I killed my elk I covered 18.5 miles looking for a bugle. In total at the end of September I covered 197.1 miles and 51,000 vertical feet on my boots according to the Health App on my iPhone. I was completely unprepared to cover that much country on my feet in years prior. My improved fitness (mental and physical) going into elk season was an important change in my season, but there were other factors that played a role, as well.

I scouted the area I was going to hunt heavily throughout the summer. I dedicated every Wednesday morning or evening from June through August to at least hiking through a new potential area to go hunting. I got to high points and glassed often in June and early July as most critters were still occupying lower country that one could see very easily. This was helpful in showing some areas where elk would hang out, but only about one-third of all the spots I glassed in June held visible animals by the time archery season kicked off in September.

As the summer progressed and elk herds moved further uphill to their summer range, I could creep through timber and hard-to-glass meadows where I expected to find higher concentrations of elk and look at sign. I was interested mostly in signs of larger cow herds. The sign I looked for included a conglomeration of bedding on the edges of meadows, multiple tracks together, and a wide variety of track sizes (cows and calves). While I did find quite a few bulls, especially in the high country, it became evident in the meat of the season the information was no longer helpful in September when bulls travel to the herds of cows; not the other way around.

It’s important to note I lived 45-minutes from the heart of the elk country, so I had a leg-up on most folks who have to travel great distances to go hunting. If you are one of those who has to travel, scouting your area one time even is still something that will give you an incredible leg-up on the season. Even if you simply identify roads, road conditions, and access points like trailheads, understanding your hunt area before you step foot in the woods with a bow is a must in my experience.

My boss and hunting mentor, Cody Rich always tells folks, “get more at-bats.” By at-bats, he means to consistently stay in elk to increase your odds at killing. The primary way to do that is to bounce around between spots, drainages and even mountain ranges while hunting, usually driving between places at night.

In 2019, I never was too tied to a specific area while elk hunting because I not only wanted to find herds of elk, but my run-and-gun bugling tactics rely on elk who want to play the game. That meant if I hit a drainage one day, I would get in my truck at night and drive to a different area. Then, I would stop at areas I had scouted to bugle into drainages. When I found a drainage with a bugle (or three) in it, I parked my truck off the road nearby, slept in the back seat, and hit that drainage the next morning.

This strategy paid off a few times, but primarily the second week of the season for me. I called in 2 bulls, one on a Saturday and the other on Sunday, but they were almost 20-miles drive via gravel roads apart. The third weekend of season I used this approach to drive to a completely new mountain range where I went from quiet elk straight into a bugling herd bull. Though I didn’t have the right set-up and he didn’t want to fight my challenge bugles, I considered it a win.

Unfortunately, while I drove around that night locating bugles, my battery bounced into my radiator fan way back in the boonies. Trying to limp my truck back to town, I blew up the motor which caused more headaches. Morale of the story, if you’re mobbing around on rough roads at night finding elk, be sure to take extra care of your vehicle. That includes checking all fluids, tires, and any tie-downs that may be important, like your battery. ­­­­­­

One of the most important things I learned this year came on a hunt with Ryan Lampers in the Wyoming backcountry. I was afraid he would run me to the ground with his renown fitness level and commitment to going deep into wilderness areas. While we did go deep, what happened when we got into elk surprised me. Instead of running from bugle to bugle, elk herd to elk herd, Ryan would always take a moment to analyze the situation and “throttle back” as I like to call it. That way, when we would go in with the intent to call in that elk, we went in with the terrain and wind in our favor.

Watching Ryan work first hand was a game-changer for my perspective. That experience highlighted the go fast, then go slow mindset it takes to kill a critter. After calling in a couple of bulls for Ryan, he arrowed a nice 6-point bull. Of course, we then experienced the famed Sthealthy Hunter 12-mile pack out.

A week later on my own hunt, I remembered Ryan throttling back when I had a herd bull pipe off 150 yards away from me. I took a handful of deep breaths, analyzed the wind and the steep slope I was standing on and corrected. Instead of being higher than the bull with my wind blowing down toward him, I got straight across the hill from the elk so he could come straight in without being intimidated by an elk with higher ground. I also was horizontal, instead of below that bull so my wind could switch up and down and I’d still be safe. In the end, I called that bull in screaming to 23 yards.

When I drew back on that screaming herd bull, I took a deep breath as I settled my pin close to his front shoulder since it was a quartering-toward shot, and released my arrow. My aim wasn’t true, however, and I pegged him in possibly the toughest place on any elk – the point of the shoulder. The arrow snapped off at the insert and I watched him go back and round up his cows. That happened after work on Monday, the 23rd of September, just two days after I blew up my truck engine.

Without my own vehicle (borrowed a friend’s 4Runner on Monday), 3 missed shots earlier in the season, and a wounded bull, I was 17 days into my elk season and it seemed like factors were encouraging me to call my 2019 archery season a loss. In Wyoming, you can pick up a rifle if you don’t fill your tag with a bow and the boomstick was sounding mighty good after so many mishaps over the course of the archery season.

That Friday, I had my girlfriend drop me off in the high country with a backpack and a bow. Though this went against my mobility strategy, it was either that option or no elk hunting over the weekend with my vehicle situation. I backpacked around and couldn’t buy a bugle Friday and Saturday before calling in an audible. I leaned on my friend Lewi to loan me his 4Runner for a last ditch effort to find an elk that wanted to play in a totally different area on Sunday.

When I dove into the drainage the following day, I tried my hardest to turn up an elk bugle in all the areas I had been seeing elk earlier in the month. With winds gusting 20-30 mph, I was getting frustrated I couldn’t hear anything and I doubted the elk I was chasing could hear me either. Then, with 45 minutes of daylight left, I piped off into a little pocket with no wind. Sure enough, I got a response, slipped in, and after dogging the herd for a couple of hundred yards, was able to get to 40 yards of the elk that would eventually fill my freezer.

I combined persistence with these other new changes to my elk hunting plan and eventually all outside variables worked in my favor in a way that lead to a punched tag. In no way could I have made these changes without incredible guidance from folks who are much better elk hunters than I am. Mentors were a big part of my success, but I also gained a lot of practical tips from the Rich Outdoors Podcast (full disclosure, I work for Cody Rich, who runs The Rich Outdoors Podcast).

I realize everyone may not have access to successful hunting mentors like I do, but there is a lot to be learned online, from podcasts and other platforms. The point is to absorb as much information as you can and be a student by seeking out and being willing to put in the time to learn.

Editors Note: The Rich Outdoors offers a great, and free email series for those who want to take their archery elk hunting from a 101 to a 201 level. If you’d like to stop relying on luck every year to fill your archery elk tag, go check it out at therichoutdoors.net/201.