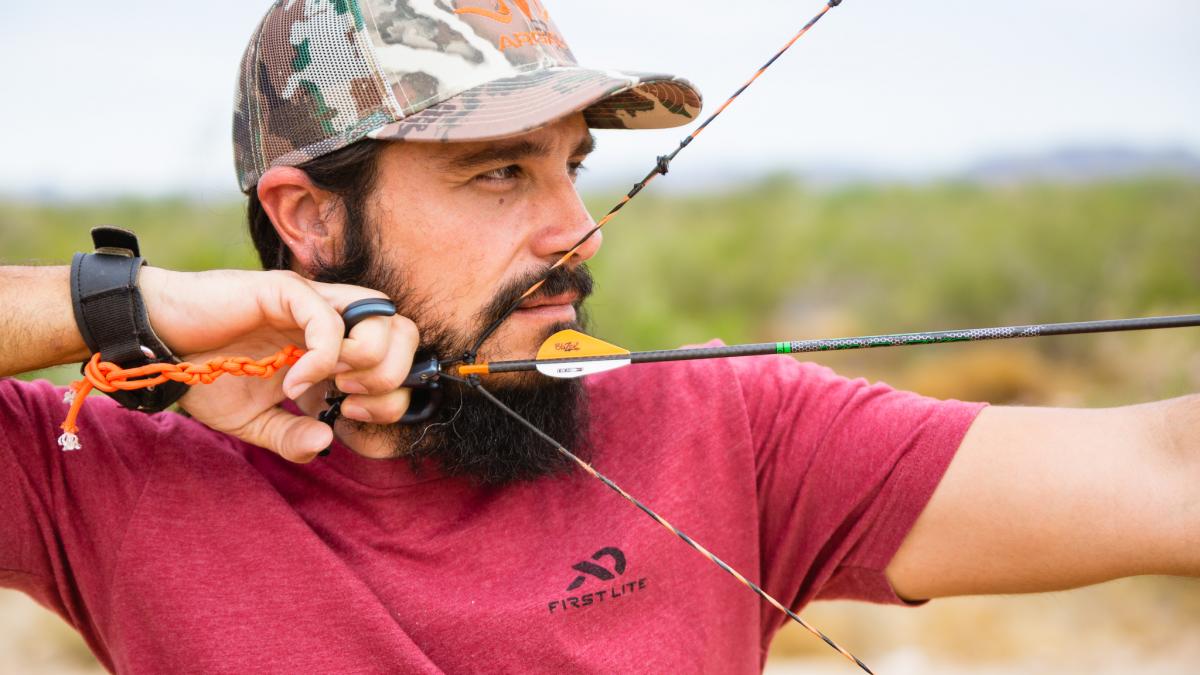 3 Reasons to Consider a Thumb Release for Bowhunting

In the natural chain of events that comes with the new developing bowhunter, most folks are drawn to an index style release aid first. It makes sense and is a great choice for someone just starting out. They’re affordable, attach to your wrist, and are easy to use. Index style release aids almost resemble shooting a gun, once you’re ready to send an arrow. This trigger pull with your index finger translates well, whether you’re coming from gun hunting or playing cops and robbers in a backyard. Ah, to be a kid. After awhile though, these release aids can lead to punching the trigger and even target panic. I can tell you right now, that most folks out there have both of these issues. It is rare to see someone shooting an index style release properly. These issues can have a huge effect on both your accuracy and confidence. Earlier this year, I personally had a huge issue with the above while using an index style release. It caused me to switch to a thumb release and I haven’t looked back since. Here are a few reasons I’ve found why a thumb release should be considered, not just for archery, but for bowhunting. 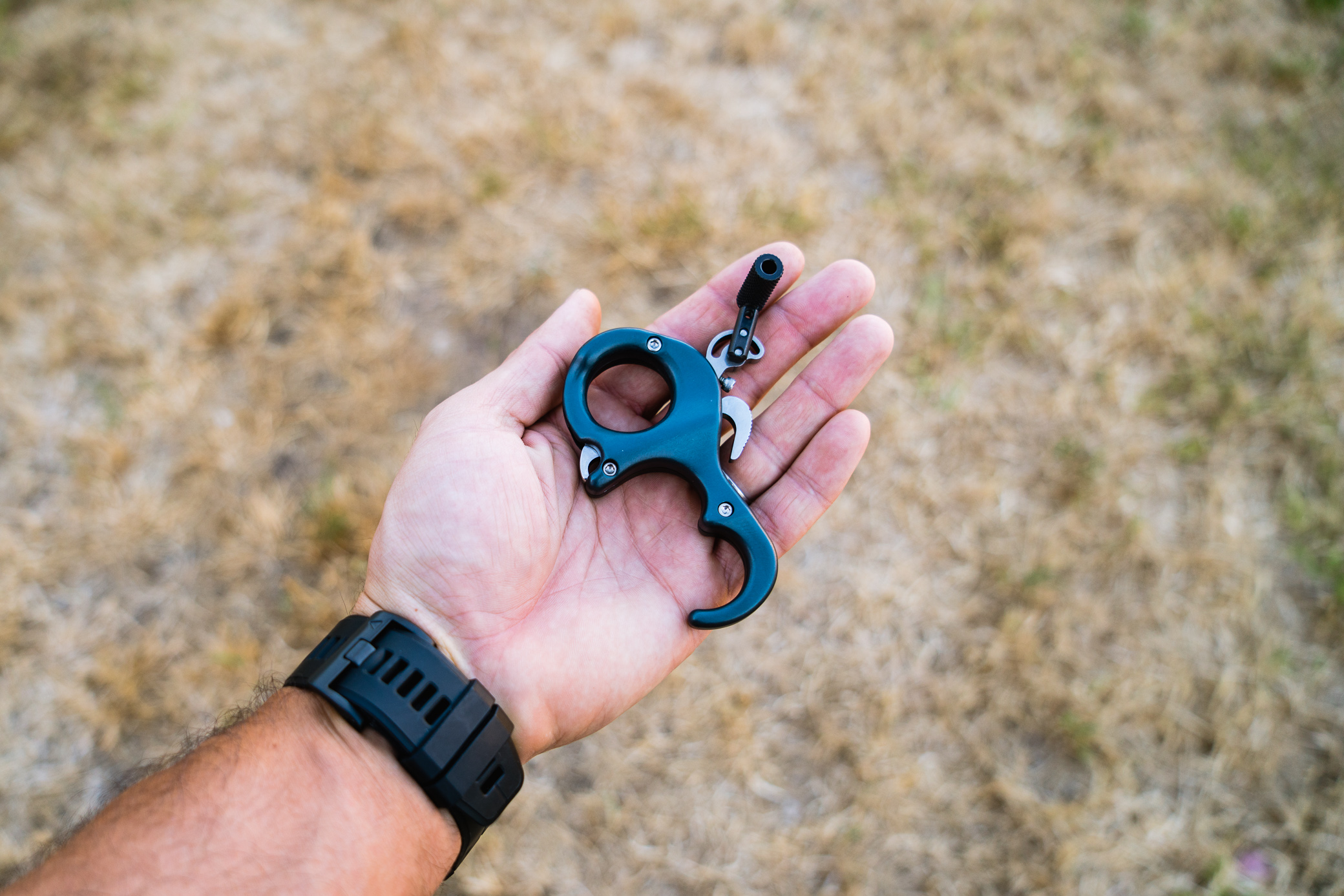 For me, a thumb release aid makes for a much more natural and comfortable draw cycle. For years an index style release aid was my go to for bowhunting. Aside from the issues I developed from them, they worked great. They never quite felt natural for me though. This is a feeling I shoved to the side and dealt with, but the fact remained. It felt like I naturally wanted to open my hand up a bit to parallel the angle of my face morewith my knuckles facing towards my cheek. When I switched to a thumb release that unnatural feeling went away, as I was able to let my hand and wrist rest in a more comfortable position. Bowhunting is hard enough as it is with all of the different angles and positions we find ourselves in sometimes. More times than not, we’re making steep down hill shots, or standing on some sort of uneven terrain. Or then there is when we may have to crouch down, just enough to make it uncomfortable, in order to clear a limb. Those things, we cannot control. Which is why I think it’s important to try and control what we can, and which release we use is one of them. I think the more comfortable and natural we can feel in an intense moment, like being at full draw on an animal, the better off we’ll be. After going through this process, every person I spoke to that did the same, said the same thing. “It just feels more natural.” 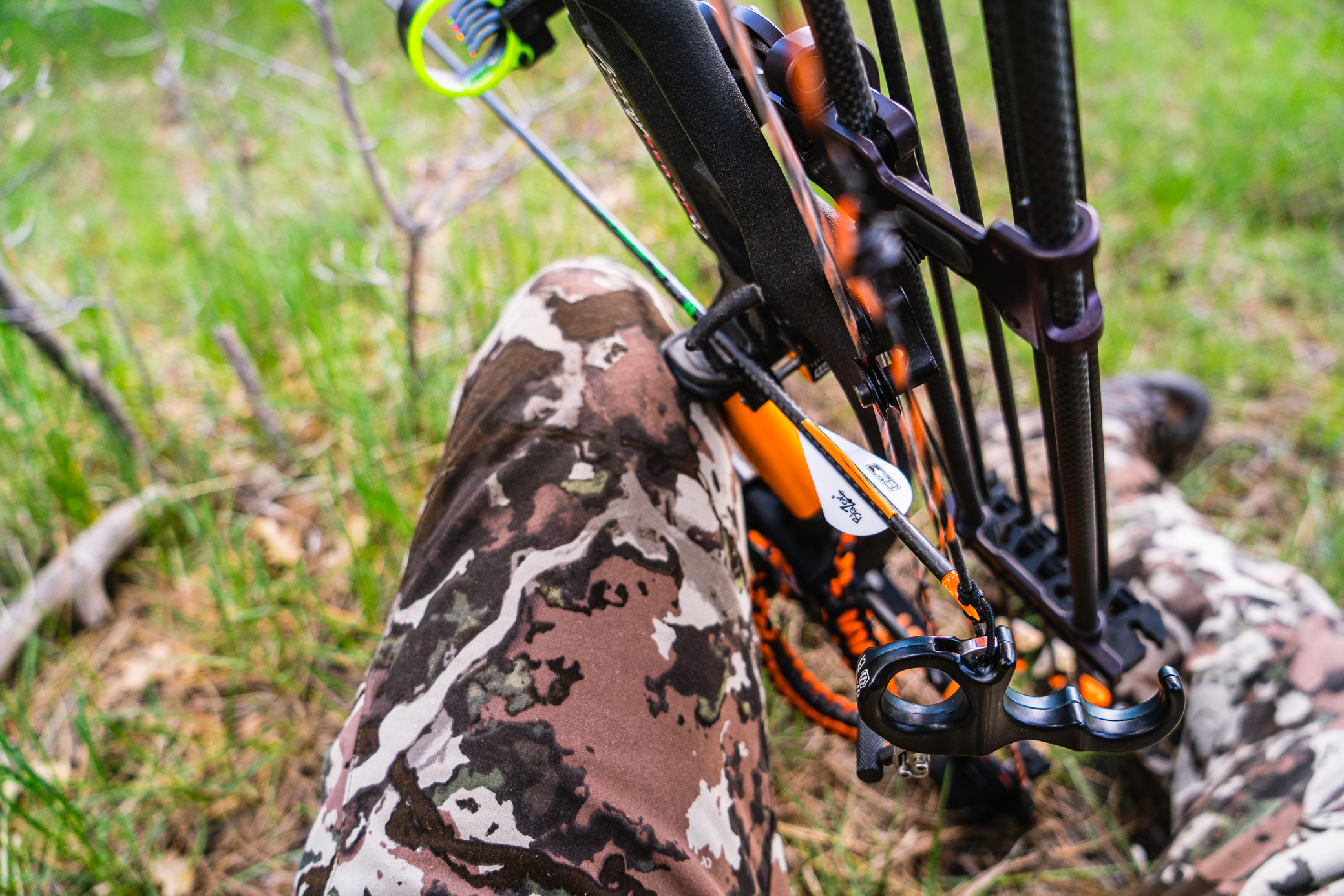 No, I’m not talking about a recipe for your CrockPot. Thumb release aids actually hold a pretty cool feature that allows one to clip the release onto a D-loop, and just let it hang right there. This is especially handy(no pun intended) for when you might find yourself hunting from a ground blind or treestand. Having that release already clipped on and ready to rock takes a whole step out of the process of getting to full draw. Time is money, and the thumb release can pay big here. Using this feature is also beneficial spot and stalk hunting. Earlier this year, I found myself sitting above a bedded buck for 40 minutes before he stood up. You can bet, the whole time I was sitting there, that release was clipped on and ready for action. When he did stand, this allowed me to get right down to business and cease the opportunity. I do need to mention a word of caution here though. When the release is hanging, be sure that it doesn’t swing from the D-loop and hit something like your riser or quiver. That clanking noise could mean the end of your stalk. To squash the issue, put moleskin on the potential problem areas. That will kick the clank to the curb. 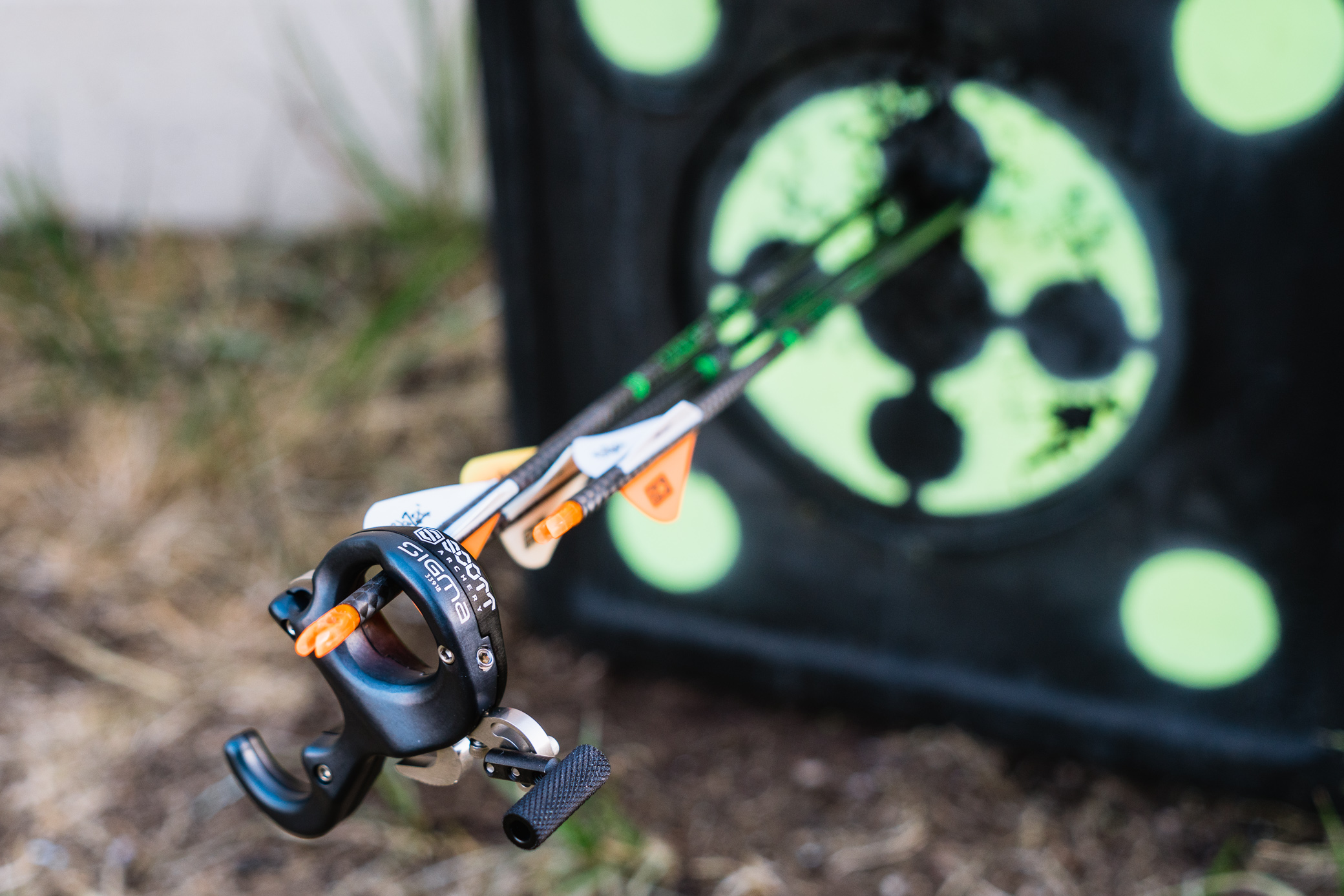 Earlier in this article I mentioned punching the trigger and target panic. Both are nasty business and can cause a damper on your shooting. These two things are the main reason I switched to a thumb release, as I had some bad experiences earlier in the year. As archers, we want to try and create a surprise shot. This is going to pay big in terms of accuracy and consistency. We aren’t just archers though right? We are bowhunters, and this is where the thumb release shines. In my opinion, the thumb release gives one the benefits of a handheld(more natural feel, surprise shot), without giving up the ability to command a shot for a possible hunting scenario. If you’ve spent any amount of time bowhunting, you know that sometimes, you’ve just gotta make it go through a small window in order to capitalize. Unfortunately, we cannot ask the animals to stand in a perfect location and not move. That’s just the nature of the beast. 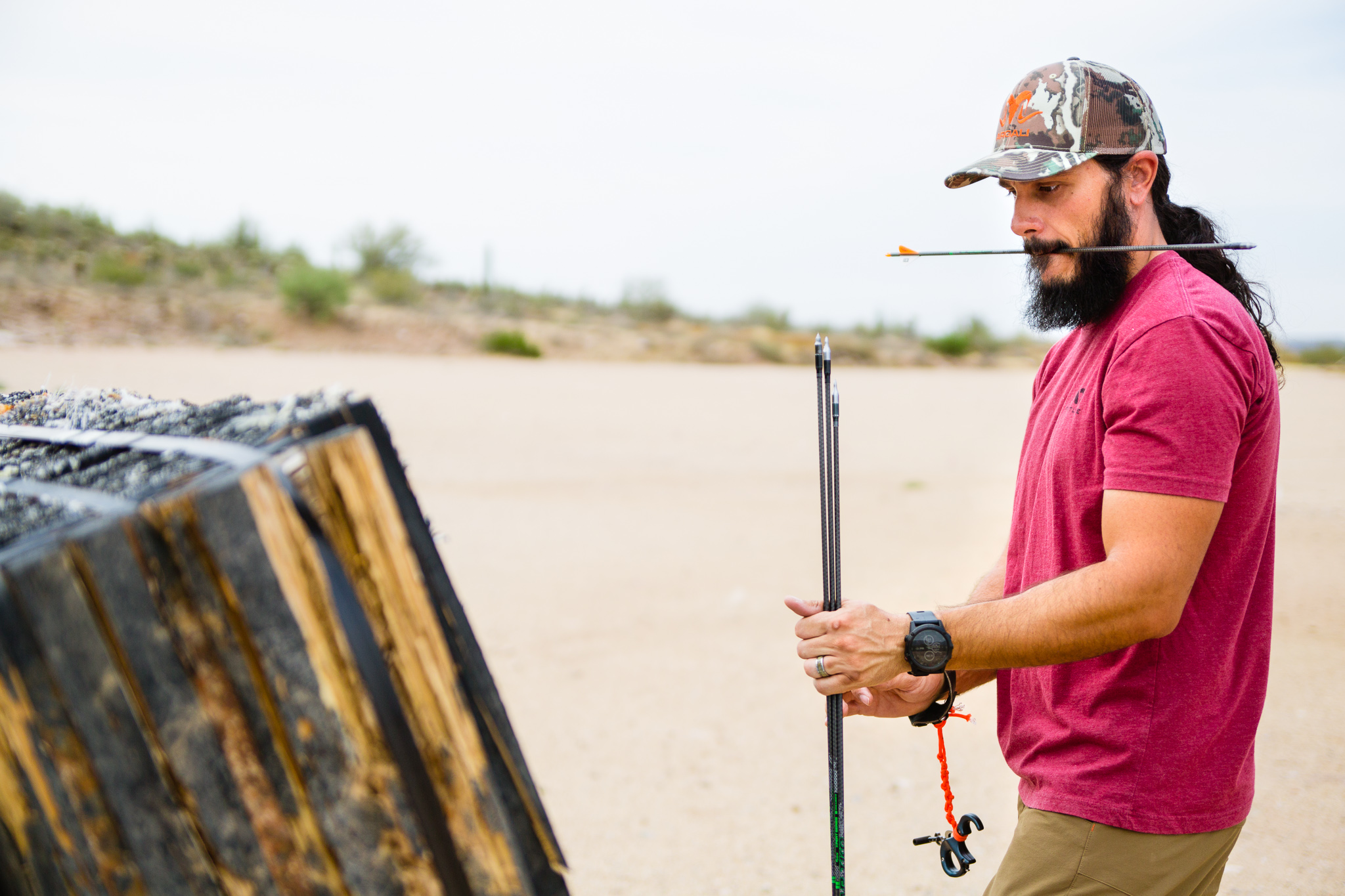 As of late, I’ve noticed more and more folks switching over to a thumb release for hunting and even more curious about doing so. The benefits are clear, but please hear me out for a second. You can absolutely create bad habits with this release, just like you may have done with an index style one. For that reason, I think it is imperative that a person seek a small amount of coaching surrounding this. Actually learn how to use the release that you’re intending on buying, so you set yourself up for success in the long run. We form bad habits without even knowing it, and when we do, it’s usually too late for a quick fix. Stomp this into the ground from the get go. With that being said, I’ve personally experienced a huge increase in my accuracy since switching. And not just that, but my consistency, which is the name of the game. It’s the most confident I’ve ever been in my shooting to be honest. If that sounds like something you fancy, go give a thumb release a whirl. You might like what you find.