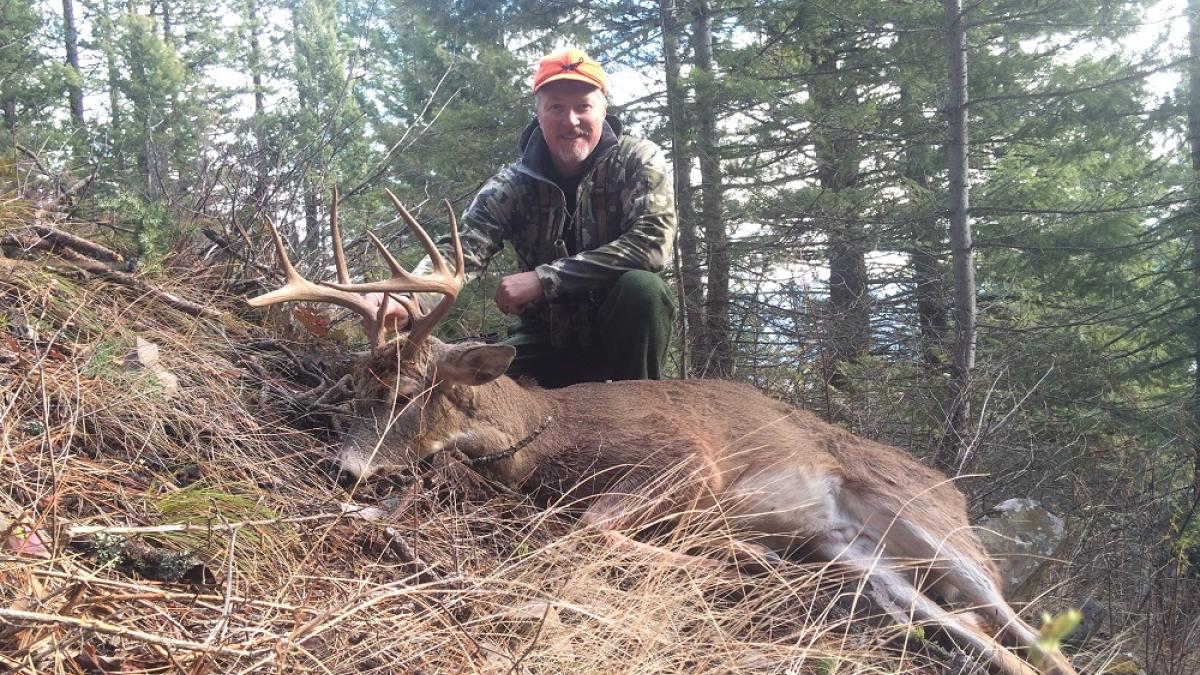 I’d come to a spot I’d been to many times. A beautiful bench with pockets of timber, the new snow was littered with fresh deer tracks from that morning. I decided I was going to sit and try a calling sequence; as I stood looking for a place to sit almost dream like there stood a whitetail buck, motionless and slightly quartering away looking over his shoulder at me from just 60 yards. After all, this is Idaho. Home of mule deer fanatics—and yes—giant whitetail bucks.

The morning before I left the tent in the dark, hoping to take advantage of a fresh layer of snow and beat the next round of storms. After gaining about 700 feet of elevation the next storm arrived. The temperature rose, making the snow heavy and wet, and rain now falling with gusts hitting 20 mph and forecast to hit 60 mph.  Last night’s snow became giant snowballs as they blew off the limbs of the giant conifers. I’m no wuss when it comes to weather but knew this was a lose—lose situation.  I’d ride the storm out in the tent.

Hunting whitetails in the west is different than hunting them where I grew up. The topography, vegetation and massive amount of public land to hunt make finding a good spot difficult and different than traditional Midwest or eastern whitetail hunting. But there are a lot of opportunities, and a lot of big bucks if you are willing to put in the work.

Where to Hunt: Finding Your Honey Hole

Twenty years ago I was a newbie to western whitetail hunting. When I pulled out my first National Forest map I was overwhelmed by the millions of acres of land I had access to. The number one factor in finding a good whitetail spot is the lack of roads or trail access. In my experience, these two factors lead to less pressure and more mature bucks. The other added benefit is the lack of others.  Noise and scent are a huge part of the equation for whitetails, and difficult access discourages a lot of folks.

The forest type I’m hunting has two prominent features, mature timber and pockets of brush. The mature timber allows me to see longer distances. Second, brush features add security, feeding, and bedding cover for the whitetails.  The brush features are almost impossible to pass through undetected so I avoid hunting directly in them. Over time I’ve learned that a southern exposure is going to have more brush and a northerly exposure mature timber.

Even though I hunt forested landscapes primarily, there are a lot of whitetails in the sage-brush dominant lands of southern Idaho where there are riparian corridors with cottontails and brush. As long as they have secure habitat, food and water, there can be big whitetail bucks.

I’ve learned to expect rubs and scrapes at transitional habitats, where old mature trees meet new, younger tree stands. Say a young stand of conifers among mature growth or a natural edge will provide what a whitetail buck is looking for when leaving his calling card.

An old clear-cut or selectively harvested piece of ground can also be very productive, but I prefer something with very little access to it. It’s key to find one that was either helicopter logged or the road is gated and a minimum of one mile or longer hike is needed to get to it. Better yet the road leading to it has been decommissioned, i.e. torn out.

Topography inherently comes into play, not so much by choice of the deer but me.  I’ve always looked for a gentle slope or an area with benches. Inherently the deer will concentrate on these for either feeding or bedding. I’ve found steep is just not as productive to hunt. It limits visibility and usually by the time you see a deer, you are right on top of them and they’re running away.

Coming from Pennsylvania I learned to stand hunt or do drives. There, I predominantly hunted from a tree stand during archery season and switched to a ground blind for rifle with most of the hunting made up of drives or “brushing” as it’s affectionately known out west. For whatever reason when I arrived in Idaho I started to still hunt.

Still hunting is a combination of walking incredibly slow and then standing still and to listen and watch. Occasionally, I’ll stand and watch in one place for up to 30 minutes. The speed of the still hunt is varied depending on the sign I’m seeing. But the key to still hunting is to move slow so you see the game before they notice you.  And above all else, keep the wind in your face.

I can’t count how many times I’ve thought about throwing up a tree stand overlooking a scrape line, but never have. I’ve walked by scrapes in the morning only to come back late afternoon to see it had been freshened up. Tree stand hunting can be productive even out west, but with so much land to explore it hasn’t ever been appealing to me.

Like whitetail hunting everywhere else, patience is a tried and true technique. I’ve recently revisited the ground blind techniques of my youth, minus the blind. If I come to a spot with lots of sign and good visibility I’ll find a tree to sit against and watch for the better part of a day. Sitting over a logged area for a day can also be highly productive. If you have the patience, this may be the technique for you.

Finally, borrowing one of the techniques from my youth is calling. If I get to a location with a lot of buck sign, I’ll sit in a location with good visibility and use my rattling antlers, grunt tube and /or doe bleat and call. I will usually give it a minimum of 30 minutes on each set. I’ve had bucks sneak in and charge in during a calling sequence but have found it works about 1:6 times. On several occasions after calling and sitting for 30 minutes I’ve stood up and either have a buck bust out from behind my set or see one that had come in but was just out of site due to the topography.

If you are into big whitetail bucks, there are nearly endless opportunities in the west. Whitetail behavior out west is different than it is in the Midwest and east due to the significant increase in land and habitat they have to roam. But if you are patient and willing to put in the work, you’ll have a chance at a whitetail of a lifetime.